Jummah is known as Friday in English Calendar is considered the holiest day of the week in the Islamic Calendar.

On this day, many Muslims around the world gathered in mosques for prayer. Many Muslims spend the day with their family, attend prayer, and rest on this day, however, habits vary. Commercial activity always resumes following Friday prayers, although most individuals in Muslim-majority nations take the day off.

Many folks who don’t have time to visit the mosque throughout the week will make an extra effort to attend Friday prayers. In nations where the call to prayer is broadcast by loudspeakers, whole cities will be drowned out. Sermons are frequently aired openly, and congregations in many cities, including Western nations like France, pour into the streets near mosques.

Crowded cities are frequently vacant and silent until the prayers when filling up with people having fun. Quran and Hadith show a strong emphasis on the prayer of Jummah. What does Quran says about Jummah is mentioned in this article below,

In the framework of the Islamic worship system, Dua is an Arabic phrase that means “to summon someone.”

Dua refers to a circumstance in which a person seeks something from Allah Almighty. In this regard, Dua is highly essential in the lives of Muslims since it is a conversation with Allah Almighty in which we express our wants and seek His assistance in resolving our issues.

Dua is a form of worship as well as a surrender of our needs to Allah Almighty. In one Hadith, the Holy Prophet, peace and blessings of Allah Almighty be upon him, regarded the Dua as the essence of devotion. 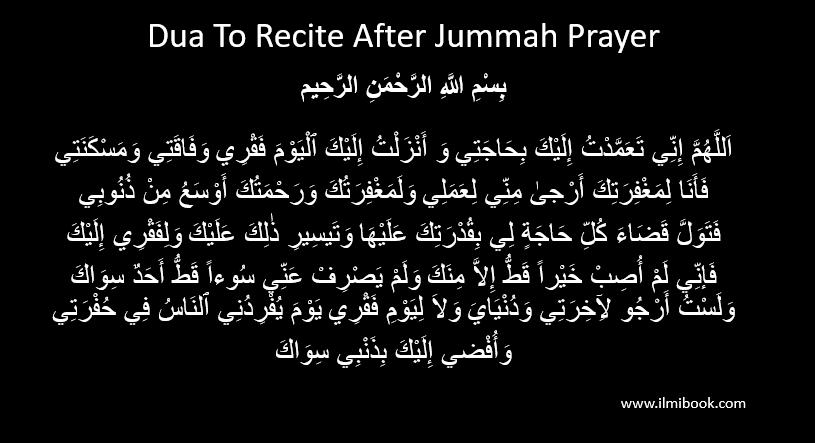 The importance of Friday as a hallowed day of prayer is mentioned in the Qur’an in a chapter called “Al-Jumah,” which means “the day of assemblage,” and is also the Arabic term for Friday. “O you who believe!” it says.

When invited to congregational (Friday) prayer, rush to God’s memory and abandon the trade. That would be better for you if you only knew.” This verse of the Quran mentions the importance of Jummah and the Jummah prayer.

Many Hadith of Prophet Muhammad (peace be upon him) also show the importance of Jummah prayer.

These Hadiths show the importance of Jummah prayer. Many caliphs organize the Jummah prayers by themselves. They usually stop their work and meetings on Jummah day and pray and after prayer, they resume their work.