What Is Eid Ul Adha? Why Do Muslim Celebrates

Home » What Is Eid Ul Adha? Why Do Muslim Celebrates

What Is Eid ul Adha?

The second and largest of the two major Islamic holidays is Eid al-Adha, also known as the Feast of the Sacrifice, the other being Eid al-Fitr. It takes place on the 10th day of Dhul-Hijjah, the last month of the Islamic calendar.

Eid-ul-Adha, the Greater Eid, Marks the climax of the yearly Hajj, the pilgrimage to Makkah at the time of Qurbani (sacrifice).

The Prophet Muhammad (Peace Be Upon Him) when asked about the origin of Eid al-Adha is claimed to have replied, “It is a tradition that has come down to us from Abraham.”

Why Do We Celebrate Eid ul Adha?

The moment when Allah appeared to Ibrahim in a dream and instructed him to sacrifice his son Isma’il to show his allegiance to God. Ibrahim was tempted by the devil, who suggested that he disobey Allah and spare his son.

Hence Eid ul Adha celebrates Ibrahim’s (Abraham’s) obedience to carry out Allah’s decree by offering his son Ismail (Ishmael) as a sacrifice. But before Ibrahim could offer his son as a sacrifice, God gave him a lamb, which he was to sacrifice in place of his son.

This command from Allah SWT was a test of Prophet Ibrahim’s readiness and resolve to obediently carry out his Lord’s instructions. Eid-ul-Adha is a celebration of sacrifice.

Animals are ritually slaughtered in remembrance of this intervention. The family that donates the animal consumes one-third of the meat, and the remaining meat is given to the underprivileged and those in need. In addition to seeing and welcoming extended family members, sweets and gifts are frequently exchanged on this occasion.

A one to three-day celebration, Eid-ul-Adha is a national holiday in Muslim countries. Muslims begin by dressing in their best attire, heading to the mosque for prayers, and giving Allah thanks for all the benefits they have received. Sending Eid Mubarak Cards is a tradition. 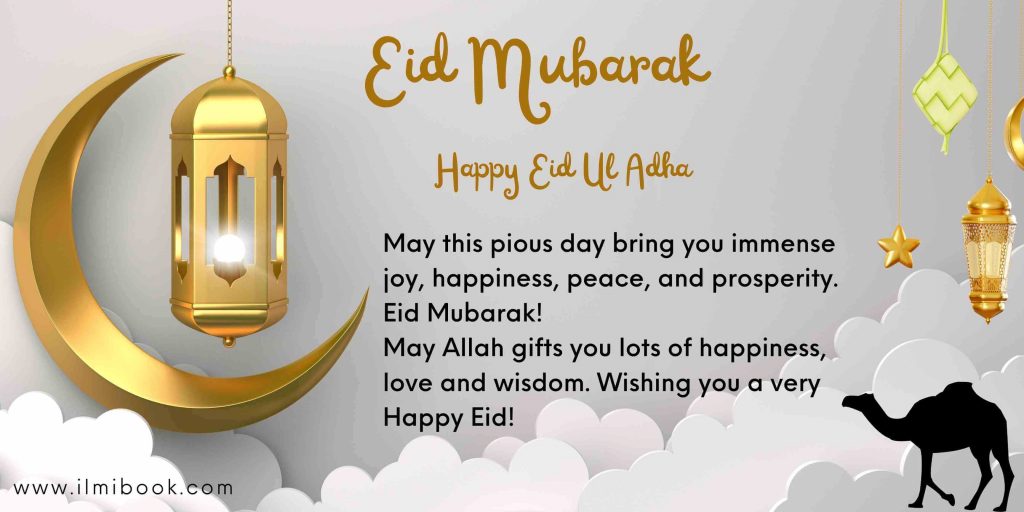 Eid prayers must be offered in a group. In the prayer congregation, women’s participation varies from community to community. It comprises two rakats (units), the first of which has seven takbirs and the second of which has five.

Following the Eid Salaah (Eid Prayers), which are recited in the congregation in the nearby Mosque on the morning of Eid, the act of Qurbani (sacrifice) is conducted.

As a mark of this event and in honor of the sacrifice made by Prophet Ibrahim for Allah SWT. The act of Qurbani entails the slaughter of an animal as a sacrifice. Udhiya is another name for this. Three days, from the 10th to the 12th of Dhu-al-Hijjah, are set aside for animal sacrifice.

Additionally, people visit family and friends during this season and present gifts to each other. It is required to donate a certain amount to charity on Eid so that it can be used to assist the less fortunate in celebrating the holiday by purchasing new clothing and food.

Allah the Almighty honored both Ibrahim and Ismail after recognizing that Ibrahim was willing to give up something important to him. Prophet Ibrahim was addressed by the angel Gabriel as “O’ Ibrahim, you have fulfilled the revelations,” and the angel Gabriel offered the prophet, Ibrahim, a lamb from heaven to sacrifice in place of Ismail.

Eid ul Adha is a day of celebration for Muslims around the world to honor Ibrahim’s commitment and Ismail’s survival.

A sheep, lamb, goat, cow, bull, or camel must be used as the sacrificed animal. Each of these animals represents one share of the Qurbani, whilst a bull, cow, or camel represents seven shares. The animal must be healthy and at least a particular age to be killed in a “halal”-compliant, Islamic manner.

The Qurbani meat can then be divided into shares of three equal portions, one for you and your family, one for friends, and one for giving to those in need. The goal is to ensure that every Muslim gets to eat meat.

The Hajj And Eid ul Adha

The Islamic calendar’s twelfth month, Dhul Hijjah, meaning “Lord of the Pilgrimage,” is when Eid-al-Adha, the Festival of Sacrifice, is observed. To visit the Kaaba, pilgrims travel to Mecca during this month. On the eighth, ninth, and 10 days of the lunar month, pilgrims do the Hajj. The tenth and thirteenth are the days of Eid ul-Adha.

As the Fifth Pillar of Islam, the Hajj is a crucial component of the Islamic faith. All physically fit Muslims who can afford to travel there should do so at least once in their lifetime. Makkah is located in Saudi Arabia. Around 2 million Muslims congregate in Makkah each year. They go to a place of worship in the city called the Ka’bah, which was created at Allah’s order by Ibrahim (Abraham) and Isma’il (Ishmael) (God). Everyone who wants to affirm their beliefs is welcome there.

While Muslims perform Qurbani to mark the completion of Hajj. Qurbani represents unwavering love and faith for Allah (SWT) and has special meaning. After Hajj, the required ritual of the sacred sacrifice is very significant. As sacrifice purifies the heart. You have to be able to sacrifice what you love. Goodness can only be attained through sacrifice.