The Quran is a valuable and incomparable book. Every phrase of our holy Quran has immense significance for every Muslim on the planet. Fatiha Surah comprises seven verses. Surah Al Fatiha is the cornerstone of the prayer, and we get to repeat it over 17 times a day, but how many of us actually grasp what we’re saying, and how many of us take the time to recognize and reflect the magnitude of this Chapter? I’m sure there aren’t many of us who find the opportunity to appreciate its value.

It is a Makki Surah of our Holy Quran, which implies that it was revealed to Allah the Almighty’s beloved Prophet while he was in Mecca, before his journey to Madinah. Al-Fatiha literally means “The Beginning,” since this part appears directly at the beginning of the Holy Quran and acts as a gateway to continue reciting Quran Majeed. Muslims must also read this Surah at the beginning of each Prayer.

The Surah, commonly known as the Ummul Quran or the Ummul Kitab, is the foundation for salat (prayer). It starts with Alhamdulillah and is sometimes known as Surah Al-Hamd for this basis. Surah Fatiha is the Surah of the Holy Quran that is most often read. 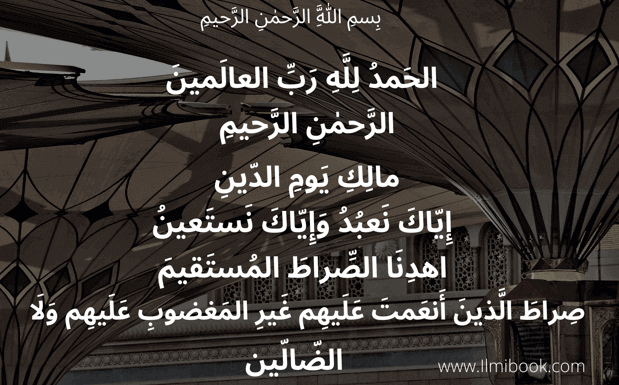 Surah al Fatiha is the only surah in Quran with is recited in every Rakat of daily prayers. There is no prayer without this surah. It is also reported in a hadith quoted below:

“Whoever does not recite Surat Al-Fatihah in his prayer, his prayer is invalid.”

Surah Fatiha is one of the most beautiful Surahs in the Holy Quran. Nobody can really compare to the greatest Surah of the Holy Quran. In the Holy Books delivered before the Holy Quran, Allah did not reveal anything like this Surah. Those who recite Surat Fatiha will be rewarded handsomely.

In every Salah, Muslims read this Surah. Surah Fatiha is, without a doubt, the most important part of our prayers. This Surah contains a synopsis of the whole Holy Quran. This Surah might help one grasp the concept of the Quran.

3. Helps in curing diseases and illness

Surah Al Fatiha is a great cure. One of the names (Ash Shifa) shows this characteristic. After being stung by a scorpion, a friend of Prophet Muhammad (peace and blessings be upon him) read Surah Fatiha, and when the Prophet (peace and blessings be upon him) saw this, he instructed him and said, ‘How did you realize it was a Healer [Ruqyah]?’ (Bukhari)

Surah Fatiha is a supplication that offers protection from Allah’s wrath and deception. This also prevents our hearts from harboring nefarious intents.

6. Protection from fear of enemies

This Surah must be recited to keep one secure from the fear of enemies. The readers of this Surah are protected by Allah, the most powerful defender in the universe. Recite this Surah on a regular basis to be free of all anxieties.

Our Prophet Muhammad (peace and blessings be upon him) recited Surah Al Fatiha when he told one of his companions that he would tell him the greatest chapter in the Quran. ‘While I was praying, the Prophet called me, but I did not respond to his call,’ Abu Sa’id Al-Mu’alla recounts. Oh, Allah’s Messenger! I exclaimed later. I was praying.’ ‘Didn’t Allah say,’ he continued.

O you who believe! Give your reply to Allah (by obeying Him) and to His Messenger when he calls you’?’ [Quran (8.24)]

‘Shall I not tell you the most outstanding Surah in the Quran?’ he asked. ‘Praise be to Allah, the Lord of the Worlds,’ he said. (Surat Al-Fatiha), which consists of seven Ayahs that must be recited seven times, as well as the Magnificent Quran, which was granted to me.’ [Sahih Al Bukhari]

Our beloved Prophet Muhammad said that if a person does not read Surah Fatiha in his Salah, his prayer is directly rendered invalid. (Tirmidhi)

Surah Fatiha is the Mother of the Quran and the Book, according to Allah’s Messenger, and seven repeated verses of it are the great recitation. (Tirmidhi)

Surah Fatiha is itself a “Dua”. Its meaning is so beautiful that when anyone recites it with its translation and Tafseer, he will get totally indulge in its meaning and thank Allah for every blessing.

Let’s have a look at its meaning.

In the name of Allah , the Entirely Merciful, the Especially Merciful.

Sovereign of the Day of Recompense.

It is You we worship and You we ask for help.

Guide us to the straight path .

The path of those upon whom You have bestowed favor, not of those who have evoked [Your] anger or of those who are astray.

Subhaan Allah! What a beautiful distribution of words. In this meaning, you can see that this surah is a collection of praise to Allah and Dua.

Other Names of Surah Al Fatiha

To conclude, Surah Al-Fatiha is not a typical passage of the Holy Quran; rather, it is the heart of the Religion of Peace (Islam), which is why we wrote about the Surah Al-Fatiha Benefits.

By being an essential component of Salah, without which Salah would be ineffective. It bears Allah the Almighty’s honor in a most desired manner, and, last but not least, it aids us by allowing us to petition the Almighty for the fulfillment of our request for one accomplishment to the straight path.

Read more about the names of ALLAH benefits.