The 255th verse of the Quran’s Al-Baqarah chapter(Q2:255) is known as the Throne Verse ( Ayat Al-Kursi[a]). According to the scripture, Nothing and anyone are considered equivalent to Allah Almighty.

It is one of the most well-known lines in the Quran, and it is frequently recited aloud and displayed around the Muslim world. It is frequently chanted to fend off jinn.

The translation of Ayatul Kursi as per ” The Noble Quran, 1999″ is as follows.

“Allah! La ilaha illa Huwa (none has the right to be worshipped but He), the Ever Living, the One Who sustains and protects all that exists. Neither slumber nor sleep overtakes Him. To Him belongs whatever is in the heavens and whatever is on earth. Who is he that can intercede with Him except with His Permission? He knows what happens to them (His creatures) in this world and what will happen to them in the Hereafter. And they will never compass anything of His Knowledge except that which He wills. His Kursi extends over the heavens and the earth, and He feels no fatigue in guarding and preserving them. And He is the Most High, the Most Great.” 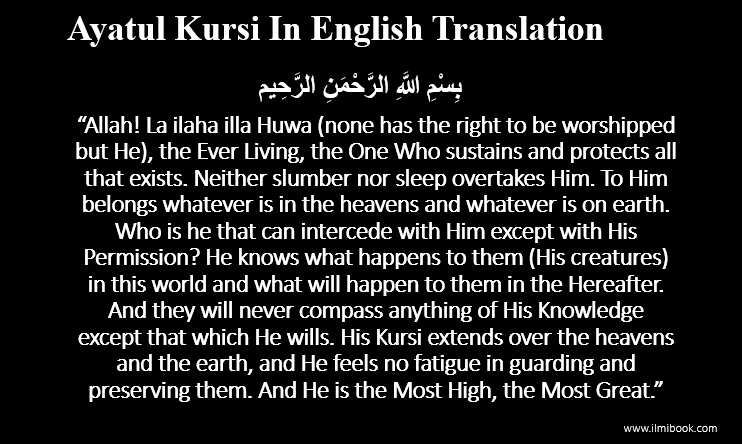 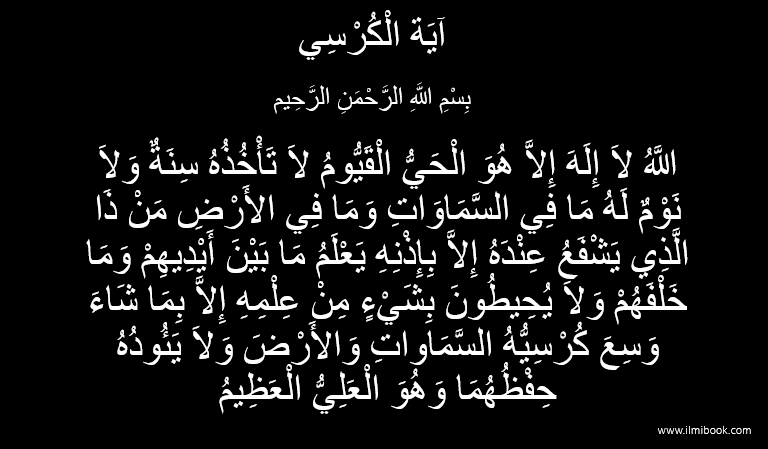 According to hadith, Ayat al-Kursi is regarded as the most significant verse in the Quran. Because it is thought that when this verse is spoken, the magnificence of ALLAH is verified, it is one of the most powerful verses in the Quran.

This ayah, also known as the daily adhkar, should be said in the morning and the evening to receive God’s protection from the harm caused by jinn and shaytan (devils). It helps to heal and defend against jinn and shaytan, and it is utilized in exorcism.

Muslims frequently repeat the Throne Verse before embarking on a journey and before going to bed because it is said to offer spiritual or bodily protection. The phrase is also used to protect oneself against khabis (jinni sexual attack) throughout the day. It is also said that reciting the verse after every fard prayer will enable access to paradise.

The recitation of Ayatul Kursi offers unlimited benefits to the person. You can read a few Ayatul kursi benefits below.

Ayatul Kursi offers unlimited blessings to the reciters, and here we have mentioned a few wazaif of Ayatul Kursi.

When you recite Ayatul Kursi with Darood e Ibrahimi, Allah Almighty will grant all your desires and protect you from evil harm.

To Solve Any Problem

If you have a problem, observe seven fasts and pray two Rakat Nafil every day after the Isha prayer. In the first Rakat, recite Surah Altariq three times, and in the second, Surah Ikhlas ten times. Then do Sajdah and recite “Subho Quduso Rabil Malaykey Arroho” 70 times. Immediately after the Sajada, recite “Ayatul Kursi” 90 times. In addition, you can recite Surah Qadr before asking Allah for assistance.

For Fulfilment Of Dua

Offer 2 Rakat Nafal Salah and read Ayatul Kursi just 40 times in each Sajda. You must read Ayatul Kursi 160 times in total. Recite Ayat ul Firdaus instead of saying “Subhana rabbi yal ala” in Sajda. To tally the numbers, you can do it while holding a Tasbeeh in your hand. After Salam, recite Darood Ibrahimi 11 times before engaging in a minimum of ten minutes of prayer to Allah. The only requirement for you is that you must pray for at least ten minutes.

Read more about the Names of ALLAH Benefits.