The ability of millions of people from all over the world to memorize the Quran, with some accomplishing this before the age of adolescence, is one of the many signs pointing to the miraculous nature of the Quran.

Where one has succeeded, many others have attempted, as is the case with other things. A dua from the Prophet’s (SAW) Sunnah (practices) will assist in memorizing the Quran.

What use would such memorization of the Quran be if it did not result in accurate, practical knowledge? After learning the Quran by heart, one must put what they have learned into practice to get the benefits for their righteous deeds and serve as an example for others to imitate.

Method For Making The Dua

1) At the request of Hazrat Ali (RA), the Prophet (SAW) responded: “When the night before Friday comes, rise in its last third section, if feasible. It would be good since that is the best part of the night because that is when angels descend, and prayers are especially granted at this hour.

If getting up at that time proves challenging, try getting up in the middle of the night. If even that proves impossible, pray the four rakaats in the early hours of the night. Each rakat should begin with the recitation of Surah Fatiha (No. 1), followed by Surah Yaseen (No. 67), Surah Dukhan (No. 44), Surah Sajdah (No. 32), and Surah Mulk (No. 67).

After finishing Tashahhud (glorification of Allah in the sitting posture of salah), Glorify Allah Almighty abundantly, Invoke praises and blessings upon me and all other Prophets and ask pardon for all believers and all those Muslim brothers who have passed away before. Then, recite the following dua.

Continuing to perform this deed for three, five, or seven Fridays, the Prophet further instructed Ali (RA). Your prayer will undoubtedly be accepted if Allah so desires. I swear by Him who made me a Prophet that no believer will ever fail to accept His prayer.

2) If one fails to remember an event or written text or spoken words, according to Imam Jafar bin Muhammad al Sadiq one should put the right hand on the forehead and recite:

“I beseech You, O He who reminds about doing good, do good, and commands to do good. Send blessings on Muhammed and the family of Muhammed, and let me remember what shaytan makes me forget.”

“O, my Lord! Advance me in Knowledge.”

4) To learn the holy Quran by heart (or remember its important verses), recite the following dua by Imam Ali ibn Abi Talib written in Sahifa Alawiya. 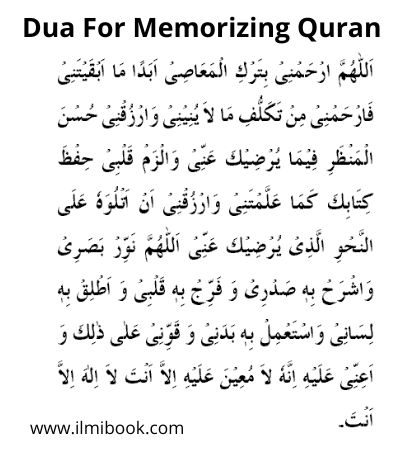 “O Allah, have mercy on me to be able to leave disobeying you till I am

alive. Show mercy on me by not imposing a troublesome and difficult

task on me. Make me do good deeds that please you. Make me learn your

book by heart, just like you have taught me. Give me the ability to

recite it in a manner that pleases you. O Allah (through the Quran)

enlighten my wisdom, open the doors of understanding and liberate my

heart. Loosen my tongue, let my body be active and give me strength

for it. No one can help me save you. There is no god except you.”

The Prophet (PBUH) says that the most honorable people in his Ummah are those who memorize the Quran. Imagine that this was such a blessed and dignified task that the Qur’an has reached us so far without having undergone any changes.

A person becomes a living Quran in addition to this aspect of the significance of memorizing the Quran. The Quran will influence how he speaks, behaves, and thinks. The Quran that has been memorized feeds the Quran.

“Whoever recites the Quran and memorizes it, making lawful what it makes lawful, and unlawful what it makes unlawful, Allah will admit him to Paradise due to it and grant him intercession for ten of his family members who were to be consigned to the Fire.”(Jami’at Tirmidhi)

Benefits Of Memorizing The Quran

The benefits of memorizing quran are uncountable. Allah blesses Muslims who memorize the Quran and live according to its teachings. The Quran and dua are related in that the Quran is a more effective and straightforward method of approaching Allah.

It is a sin to memorize the Quran, understand it, and then forget it. Thus, when Muslims memorize it, they should revise it regularly.

In addition to all this, attempt to make Dua after recitation whenever you engage with the Quran because it is more likely to be replied to at such times.

Allah blesses Muslims who memorize the Quran and live their lives following its teachings. According to the Prophet Muhammad (SAW):

“One who was devoted to the Qur’an will be told to recite, ascend and recite carefully as he recited carefully when he was in the world, for he will reach his abode when he comes to the last verse he recites.” [Hadith | Al-Albani]