In Islam, Dua e Qunoot is a prayer that is read standing up. A suitable example is when you offer Witr, which is Sunnah.In Dua e Qunoot, the word Qunoot refers to an act of submission or obedience. The Arabic word Dua means supplication.

It has many semantic meanings such as obedience, humility, and devotion. Qunoot is one of the special dua recited during the Isha prayer.

When praying the Qur’an as a discipline instead of a recital, there are few things as simple or important as genuinely putting yourself in a frame of humility and devotion when you read from the scripture. After all, ruku’ means being humble before and surrendering completely to Him.

O Allah! We invoke you for help and beg for forgiveness, and we believe in you and have trust in you, and we praise you, in the best way we can; and we thank you, and we are not ungrateful to you, and we forsake and turn away from the one who disobeys you. O, Allah! We worship you and prostrate ourselves before you, and we hasten towards you and serve you, hope to receive your mercy, and dread your torment. Indeed, the disbelievers shall incur your suffering. 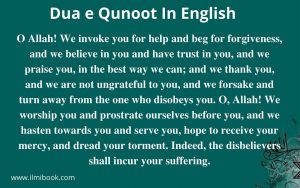 Dua Qunoot (sometimes referred to as dua-e-qunoot or qunut dua) are special supplications mentioned in the hadith. Some people may know it better because they listen to it during prayer at a masjid regularly and think that’s the right way to do it.

So what is the correct position as per Islamic dictates? The correct position is that one can recite Dua Qunoot anytime throughout the day, even during their regular salah daily. Because the Prophet (ﷺ ) was recorded in many authentic hadith narrations as saying the name of Allah in whatever place he happened to be whether privately or publicly- whether at home, work, or out among other respectable members of society.

There is no obligation that Qunoot must be read during Witr Salah. Still, it has been reported by some reliable scholars as being Mustahab (recommended) as per hadiths related to this very topic.

Which of the two should we Recite?

It was narrated that Ibn’ Uqayl al-Hanbali (may Allah have mercy on him) said, “The only dua’s told from the Prophet (ﷺ) is what is included in what has already been mentioned about reciting: LAA ILAAHA ILLALLAH. [and so forth] and anything which has been mentioned after that should be what you offer if you wish, but it is extra.

There isn’t anything otherwise that we see in terms of duas, supplications, dhikrs, or invocations to be prescribed in these narrations. But if someone would like to add and recite it, there is nothing wrong with it, except for the statement: Make vast your wings. This was not attributable to the Prophet (ﷺ).

Dua Qunoot Before and After Ruku

Scholars have debated whether the Qunoot Dua is said after Ruku or after bowing. Some people prefer to say it before Ruku and bow as one unit, and others choose to continue reciting the Qunoot until after turning and then take their Ruku (bowing) as one unit.

Since this choice is personally motivated by differing opinions, it seems that it would be acceptable to Allah (SWT) either way. After saying Sami Allahu liman hamidah rabbana lakal hamd, we raise our hands for supplication and recite specific sentences.

After finishing, we say “Allahu akbar” and fall into the prostration position. Right when the Imam prostrates, he’d say a takbeer followed by the Muslim congregation.

Can the Qunoot Dua Be Found in the Quran?

No, the dua e-qunoot is not mentioned in the Qur’an. It is the Sunnah of the Prophet (ﷺ).